About a month and a half…

It’s been about a month and a half since I started re-writing OurUNO in a nice, intelligent, frameworked system with Smarty and I ran CLOC on my source dir today. CLOC doesn’t do Smarty templates, so I ran them as HTML, close enough, right?

What I like is that my PHP files are ~23% empty space, and the one shell script has only 1 line of code. Now, the PHP is all new as is most of the javascript and some of the TPL files. So even saying a 60% cut on JS, CSS & TPL, thats still 3728 lines of code in the spare time from about a month and a half, so about 83 lines a day. It’s amazing what as little as 83 lines a day can do.

Released Nix 0.7 today. It’s a minor-ish update that mostly just adds a bunch of cpu icons to the configurator.

You have got to love MySpace. Their code has got to be so nasty, I mean, just the markup on a profile makes me sick to my stomach, I can’t imagine the pasted together backend that would generate that mess.

When I got an event invitation I went to RSVP and had a thought. I wondered how well they error checked their inputs. I mean, I’m sure they strip and escape for SQL injection, but do they constrain anything?

I busted out Firebug, edited the source for the RSVP and now I’m bringing several tens of thousands of friends with me to the party. Awesome. 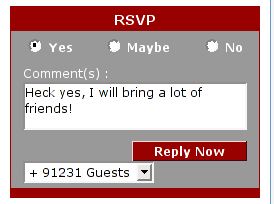