At Pack we use ascii-based unique identifiers in URL’s a lot. We call them slugs. Dogs have them, users have them, breeds have them, etc.

I made the decision early on to keep the slugs plain old ascii. No unicode. These are primarily for URL’s, and I wanted them easy to type. Most slugs in the system are automatically generated. These slugs are derived from names when a dog or user is created in the system. This is a problem, because there are a lot of people in the world who use characters outside of the ascii set.

Usually, the solution is just to drop non-ascii characters. This is the simplest option, and it works. For example, Designer News uses this technique. In the case of John Henry MÃ¼ller, they simply drop the Ã¼ because of the umlaut, giving him the user URL of https://news.layervault.com/u/11655/john-henry-mller/. MÃ¼ller becomes mller. I find this less than optimal.

A second technique is to use homoglyph substitution. A homoglyph is a character which is visually similar to another, to the point that they are difficult to quickly distinguish with just a glance. I’m familiar with them from the world of phishing, where people register domains that look very similar to other domains by using homoglyphs.

Once you build a list of homoglyphs, it’s easy to create slugs that are ascii only through substitution. We expanded the definition of homoglyph for our list to include anything you could squint at funny and think they were similar. The method is a bit brute force, but it only ever runs once per string, and I think the outcome is worth it.

This works well for us, we get reasonable URL’s for dogs like “HÃ³lmfrÃ­Ã°ur frÃ¡ Ã“lafsfjordur”. holmfriour-fra-olafsfjordur is not the same, but it’s close enough for a URL that you don’t mind, and it’s better than using hlmfrur-fr-lafsfjordur.

Unfortunately, this doesn’t work well for un-romanized languages, notably asian languages, such as “ã‚¯ãƒƒã‚­ãƒ¼“. In this case, the system breaks down and we end up with no usable slug, so we build from a default. I’m still seeking a solution for that. Maybe I should use automatic translation on it.

“Neither governments nor corporations should be allowed to use disconnection from the Internet as a way of arbitrarily furthering their own aims.”

Extracting When You Visited A Page From Firefox

Need to get the exact time that you visited a page in Firefox? I couldn’t find an easy way to look this up in the History interface, or anywhere else for that matter. I did however know that Firefox stores this kind of thing in sqlite3 databases. Here’s how I got what I needed.

First you have to find the sqlite databases, I’m on Linux so that would be in my home directory. The database you want is places.sqlite. Crack that open in sqlite3. Your command will differ as this is based on your profile name, mine is “gmail” so I ended up with g69ap5lc.gmail.

Be aware you have to shut down the Firefox instance first, because it locks the file. Make sure your privacy settings won’t erase it all when you shut it down! I had to change mine to “Remember history” first.

Next you need to find and grab the timestamp. This can be a chore if you don’t have the full URL. I was looking for the one from spiffie.org below.

The column we are interested in is last_visit_date which is 1261169238197827 in our case. You can also list all the recent visits from the moz_historyvisits table with the id column.

Now we need to convert that timestamp into something we can read (unless you are a super UNIX geek and can read timestamps). This instance is too precise for the date command, so lop off the first 10 digits and use that, so in the example we use 1261169238.

Not short and sweet, but it works.

I was playing with clip and border-radius and put this little guy together. 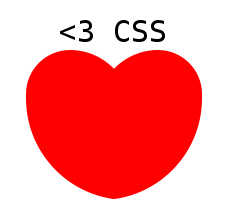 I haven’t tested it in anything but Iceweasel 3.5.5, so your mileage may vary. You can check it out here: CSS Heart.

This is only two divs to make the heart. Much less impressive than the Homer Simpson in CSS.

I suppose I could have just used &hearts; huh?