I think I’ve sorted out how I’m going to make my switches for the drums. I’m still tempted to go the “air-pressure triggered in tubs” route, but I think my current design would be more robust, sturdy and just as long lasting (if not more).

The idea is to get two flat chunks of plywood, as thin as I can go (1/8th” probably?), some nuts, bolts and springs. Cut the plywood to be equal in size, then put together with 4 bolts and the springs in between. That should allow for the give I need to keep the switches apart, plus it should be adjustable if the play is too much for the drummer.

The switch itself will be a bolt that threads up to a contact point (a.k.a. some scrap piece of metal). This will also allow for quick adjustments in the force required to trigger it. The switch will then run off to a standard 1/4″ or 1/8″ mono plug for plugging into the controller. As an added bit there will be silencer padding on the drum, since that’s sorta what we’re going for here… I’m thinking about just searching for a bunch of old mousepads rather than spend $20 on pads.

Here are some explanatory images I painfully crafted in that wonderful prototyping program “Paint”. 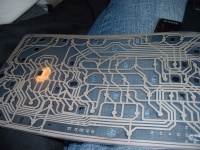 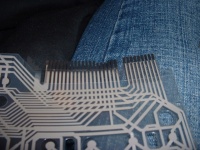 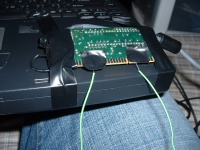 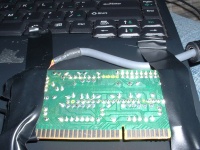 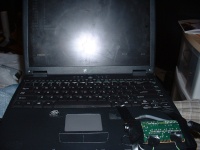 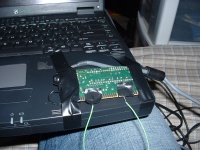 I finally started work on my DrumKit project today. Essentially this is an attempt to create a electronic drum set from some pads, an old keyboard and a computer. I got down to buisness and wrote up a Java app that plays back the drum sounds on key press events. It filters them and even handles shift for the hi-hat open/close, which I’ll use to make the hi-hat pedal work.

The source is messy, and still has relative path’s for the sound files. Essentially it’s a frame, a keylistener and some clips. Not too rough, though patching this together from the Java API and sparse information on javax.sound.sampled was tougher than I guessed it would be. Anyway, it’s got some bugs and features not implemented, but I can play drums with my keyboard now, which is a good start.

I suppose I should upload the code just in case, and to keep track of my versions. You can get the source and the sounds for Version 0.01 below. As a heads up, all the kit samples are absolute path’d for my machine, so you’ll need to adjust them if you intend to compile it.
» DrumKit001.tar.gz – Everything
» DrumKit.java – Main class
» KeyHandler.java – Event listener
» KitClip.java – Kit sample class

Today I started working on my Chu Moy pocket amplifier, named after the creator. I’m working from a set of plans I found at tangentsoft.net which are very good and very detailed. A few days ago I bought almost all the parts from Digi-Key for under $20, and I bought the remaining little bits from Radio Shack this afternoon. An important note for anyone who attempts to make one of these, is that some of the parts listed on the tangentsoft pages are obsolete, and you have to do a little searching through Digi-Key for an equivalent piece.

I’ve never done any serious electronics work. In fact, the only thing I have done is put an EL panel in my Linux Zip-It, which I had a marginally tough time with. I was going to do the 5-Wire hack on it, but the points looked just a tiny bit too small, thus I have a serial d-bus and an RS232 IC lying in a box somewhere. Anyway, I’m off topic. I’ve almost no experience with electronics, thats what this paragraph is trying to get at. 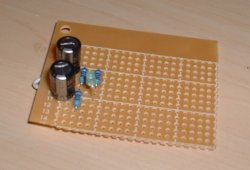 Let me be the first to say, this was a mistake. I don’t know what I’m doing here. This picture is the result of about an hour of work. That’s 6 components and 4 jumpers in an hour. Plus, if I had a picture of the underside, it would be even less of an accomplishment. The camera batteries died, so I do not, PTL.

I am decent with a soldering iron, and I can make nice, smooth joints on the board. The problem is, I bought a generic PC board that doesn’t have any traces, so I need a bunch of jumpers. Getting the jumpers in the right place along with the component and soldered all nice just wasn’t happening. I’m still confident it will work, but it sure ain’t pretty.

I’ve finished the power section, got the op-amp on the board, and most of the other components. I still have to put on another 4 resistors and then wire up the potentiometer (thats a fancy word for volume knob) and the input/output jacks. Once I’ve done that and the batteries have recharged I’ll get some more pics up here and we’ll find out if my skillz were sufficient to result in a working amp.

9/24/06 – As promised, here are some more photos. They’re blurry because it’s dark in here and my camera doesn’t focus well. I apologize for all the white space, something’s weird in my layout. Thanks ray326 :) 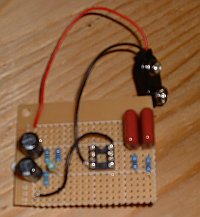 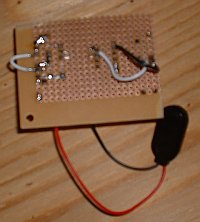