After a lengthy break from DK421 development I started up again this evening. My primary purpose tonight was to learn how to program my arduino and to learn the basics of serial communication with javax.comm. I wrote a led blinker that also sent some data over the serial connection. 0 when it turned the light on, 1 when it turned it off. and yes, I know that seems backwards.

After a short battle I hacked up the config and a sample program to print my data. It’s not printing the right values, but it is printing the wrong ones consistently. I think it has to do with my function to convert a byte array to an integer. It also has a small runtime exception that I didn’t work out. Regardless, it’s working. I’ll install Eclipse on this machine and maybe get it working even further soon. Next step is to get some piezo’s and learn to read them.

On that front I was thinking about using the velocity of an impact to handle the volume it plays back. Maybe something of a code, like if a strike is registered with a strength of 100 on pin 0 it could send 0_100 or something. Thats in the future though. I am worried about the fact that there are only 6 analog pins though. That means 6 drums without adding another board.

I’m currently re-thinking the future of DK421. It’s the hardware that has become the hang up. I’m 100% sure that the design I have for the pads is physically impossible. In point of fact, the design is mentally obtuse to begin with. A drum stick just doesn’t hit down with any reasonable amount of force. To think it could be enough to move a not insubstantial amount of plywood any real distance was silly. More so considering I also sought to compress four springs.

Where that leaves me is with a strong desire to use piezo transducers, or some other cheap, microphone-like option, combined with either a micro controller or some relays or something. The hard part is I don’t know any electronics really, I’m just winging it so far.

The vector I’d be most happy with pursuing is using an Ardunio board to read the transducers (voltage? wattage? I dunno…) and when they peak a certain amount, fire off some information over a serial connection. The problems are many for this. One, I don’t have a micro controller, and don’t know how to program and use them. Two, I’ve never done any serial port programming, and am not completely sure if it’s even a viable option for passing the data. Three, I don’t know what to measure on the transducers or how to do so. Four, I think Java might be out of the question with the serial. There is a javax.comm, but I’m not so sure about it.

Regardless, I want to try this way. I’ve wanted to buy a micro controller to play with for a while now, and the Ardunio is open-source and way cheaper than a basic stamp setup. I also kinda want to get me C++ back, and maybe learn how to use QT or GTK. This is either going to be long and fun, or die in shame. Going to buy the board tonight I think. 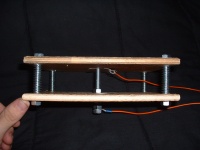 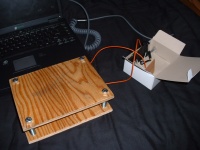 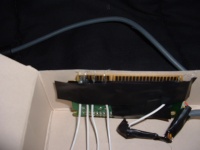 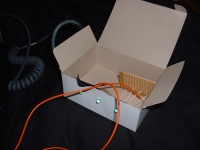 Back To The Software

After some fantastic hardware work I’ve started yet another rewrite of the software for DK421. This time I’m rebuilding it to use more graphical options and let you load new clips without restarting the whole thing. I’ve been learning a bit in my Java class about all this GUI stuff, so I thought I’d apply it.

I’m still hoping someday I can add a save/load functionality to bring in a while sound set. Not the biggest deal at this point, but it would be a nice convenience. I’ve also gotten the first test drum pad cut and am going to buy the other pieces tomorrow. I might have a working pad by tomorrow evening, though my late classes might have something to say about that. I’m tempted to bring my controller to school and work on it between classes. Probably won’t though. Anyway, DK421 is in the early stages of version 0.03 now, I think it’s time to make it a better project page.

P.S. I’ve set the size for this project: 12 Controllers. So that comes out to 1 hi-hat and up to 9 other pads (cymbals, snares, whatever). More than enough for almost any drum kit. I think my first hardware version will be snare, hi-hat, kick, crash, ride. I’ll probably add toms later.

I think I’ve sorted out how I’m going to make my switches for the drums. I’m still tempted to go the “air-pressure triggered in tubs” route, but I think my current design would be more robust, sturdy and just as long lasting (if not more).

The idea is to get two flat chunks of plywood, as thin as I can go (1/8th” probably?), some nuts, bolts and springs. Cut the plywood to be equal in size, then put together with 4 bolts and the springs in between. That should allow for the give I need to keep the switches apart, plus it should be adjustable if the play is too much for the drummer.

The switch itself will be a bolt that threads up to a contact point (a.k.a. some scrap piece of metal). This will also allow for quick adjustments in the force required to trigger it. The switch will then run off to a standard 1/4″ or 1/8″ mono plug for plugging into the controller. As an added bit there will be silencer padding on the drum, since that’s sorta what we’re going for here… I’m thinking about just searching for a bunch of old mousepads rather than spend $20 on pads.

Here are some explanatory images I painfully crafted in that wonderful prototyping program “Paint”.