This Thursday was the first Mastercraft Chili Cook Off put together by the crew at Big Ink. I made a chili on behalf of the What Cheer team, and Becca made corn bread. We didn’t win (Big Ink’s delicious chili did) but we were the best vegetarian chili! Also the only one.

I based my recipe off of the Ultimate Vegan Chili from Vegetarian Times, but made a few tweaks. Here is my rendition. 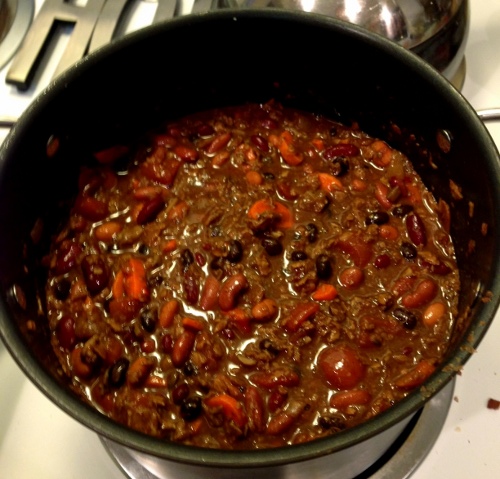 Heat the olive oil in a large pot over medium-high heat, add onion, and sautÃ© 7 to 10 minutes, or until beginning to brown.

Cover, and reduce heat to medium-low.

Simmer 1 hour, or until carrots are tender.

My chili was too thick, so next time I will greatly reduce the amount I drain from my beans, and I may add stock at the end if it still looks to thick.

I’d like to increase the amount of ancho chili, I love that smoky flavor. I’d also like to try adding in a bit of dark chocolate and cinnamon, something that the Big Ink team did to great success.

I really enjoyed the toothiness of the carrots, so next time I might add in a stalk or two of celery as well. The Burns & McDonnell chili had celery in it, and I liked that.

Lastly, this chili needed more heat. I like the back end burn of cayenne, so I think I’ll add more of that. Another chile de Ã¡rbol couldn’t hurt either.

Then, in Chrome's JavaScript console, I just hooked updates from socket.io into an XHR to provide the values to my PHP.

It worked like a charm, I didn't have to mess with the server at a crucial point, and we got the data we needed.

One often important, and often overlooked aspect of modern web development is Open Graph tags. You know, those meta tags with weird attributes that break your page validation? That’s a whole other topic though.

Today, I want to talk about the Facebook Object Debugger, and giving it access to an HTTP Auth protected environment, such as a staging or pre-launch production site. This is Apache specific, so nginx fans will have to look elsewhere.

Assume you have this setup in your Apache config or htaccess;

The easiest way that I’ve found to make this work is to accept based on user agent. I originally tried allowing it based on IP address, but the debugger uses many IP addresses, and after I had added a half dozen I gave up and switched to user agent.

Be aware, that because of this, it’s quite easy for someone to fake their UA and gain access, so I recommend only using this code while you actively use the debugger, and turning it off afterwards. This also prevents leaks if someone pastes the URL into an actual Facebook comment.

Check out this page at AskApache for a nice guide to SetEnvIfNoCase.

I’m going to get on a programming soapbox real quick and cover a topic that seems to confuse some people.

Some people seem to think that swapping out a secret with a hashed version of that secret makes it all safe and cozy, but that’s simply not true.

Yes, cryptographic hashes are a very important part of digital security, for a number of good reasons, but they have to be applied in a manner which takes the whole system into account.

The impetus for this work was a login integration I recently updated, because some other developer foolishly applied hashes.

Essentially, we were cross-posting a login form on one website to another. Nothing fancy. Ignore the lack of CSRF control.

Now, I’m sure when this idea was implemented, it was sold as a way to authenticate the user, without exposing their password in plaintext (note that they don’t use SSL). Brilliant!

Yes, it does obscure the plaintext password, but it is not any more secure.

You see, they didn’t think about the system as a whole, they were just focused on obscuring the password.

All that happened here is a substitution of shared secrets.

As a bonus, they picked MD5, probably because it’s been implemented many times, there is a JavaScript version readily available, and it tends to be one of the first hashes people learn about, due to it’s age.

But MD5 is weak. And we have the salt, if you can call it that, in the username. An old 2Ghz P4 can try about 20 Million hashes a second, and throwing a modern GPU at it you can test several billion hashes a second. If we want the plaintext password, we can get it unless it is reasonably large (7+ characters) and fairly complex (at least one non-alphanumeric character).

For an extra thought, consider how they must be storing these passwords. Either there scheme has always been MD5(CONCAT(username,password)) or they are storing them in plaintext and are (hopefully) migrating to hashed.