So guess what Darcy and I did Friday night? That’s right, made a lame awesome movie. It’s called The Chase

“Neither governments nor corporations should be allowed to use disconnection from the Internet as a way of arbitrarily furthering their own aims.” 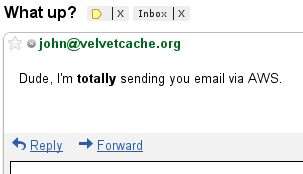 So, work has me writing Java for the first time in my life. I needed to handle some data in JSON format, and was using Jackson and it’s ObjectMapper for a while. Fast and a relatively nice interface.

Today I switched to Gson for the even simpler API. It’s slower, but I’m just munging little strings every once in a while, so that’s not a problem.

The one thing I came across today that didn’t go as expected was serialization with inheritance in my objects. Here’s where I started:

I expected to see the JSON representing of each. Much to my surprise, I got this instead:

What the what? Weird. So I thought I’d try adding a constructor and setting it there.

Again, no luck! I got the same output as before. I gave it one last shot.

That time I got it.

Strange. So it seems that when serializing an object, Gson looks for the value of a field in the superclass. However, when you are in the object you are accessing the local field. It seems like a weird scope thing. Interestingly, if you provide a new implementation at the subclass level it will use that one instead.

This seems to be noted in the user guide at “Finer Points with Objects“. I must have just missed it.

Easy enough, though a little annoying.

“Programs must be written for people to read, buy and only incidentally for machines to execute.”