Introducing pyTower, a python based Sim Tower clone. This is a new project I started, after finding the existing clones lacking. So far it’s in a really useless stage of development, but I wanted to show if what I had done so far.

I’m building it on the pygame library, which is a low level wrapper around SDL. I have to say, I am incredibly impressed with this library. You can get started really, really fast. Just focus on surfaces, rectangles, events and blitting. Ta-da, you have the basic tools for a game.

Anyway, the dev work is at github for your enjoyment.

One of the (I think) cool things I am doing is implementing the menu system in Qt4. Menu’s are hard in pygame, IMHO, so I went around them. This gives it a bit of an MDI feel, but I like it so far. If things go well I might find a way to move the mini box into another window. I think this will be beneficial long-term because I’m planning on making the technology tree really flexible and extensible.

Anyway, here are the totally not-cool looking screen shots I have so far. Art is hard. 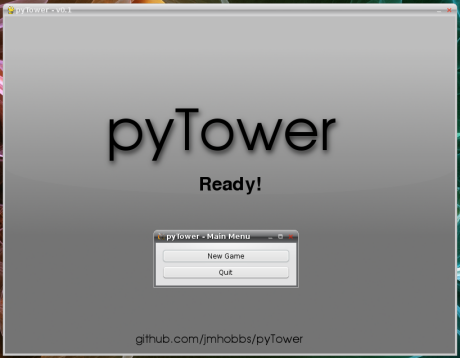 The game space, with mini map!

“Watching someone else use your computer is like watching a drunk orangutan solve a Rubix cube.

– Matthew Inman, mind The Three Phases of Owning a Computer

Thursday Quote: Every Time I Die

“It is better to destroy, pill than to create what is meaningless.”

– Every Time I Die,
Imitation Is The Sincerest Form Of Battery
on The Big Dirty

Update: 2009-12-30
I put a bunch of scripts together into a collection on github, called pyUSB7. Check that out for lots of this sort of thing.

I recently dug out my USB7 and thought I would play with it. I don’t know if it has to do with my distro (sidux), or the kernel development in general, but the USB7 works on plug in, contrary to what the product site says.

Anyway, once I got tired of echoing numbers to the USB7, I thought I’d try writing something with pySerial, which I had looked at a long time ago, but never tried.

It is remarkably easy once you get the settings right. Here is a little clock program that I wrote which counts up the elapsed seconds in the day, and also has an hour/minutes/seconds layout. These toggle back and forth every 10 seconds.