I was on Arachnoid.com today looking for the lovely Ruby SearchReplaceGlobal I had used on my home machine. I happened to click on the link to this essay (post? rant?) and read it through. I really like his take on what the internet has become; “The new Internet, unlike the old, is hierarchical â€” there are vendors and there are consumers. The vendors are perpetually in your face, and the consumers, like consumers everywhere, behave like narcissistic children â€” whatever it is, it isn’t good enough, give me more.”

Like said, I read it through and it’s a bit of a rant by someone who seems frustrated that users of his freeware won’t take responsibility for themselves. I think that the “old” internet has been surfacing from time to time out there. It’s ridiculously easy to get help from other developers out on the web, especially if it’s an internet technology. Blogs are most often free and open content offered without any demands on the end user.

Social sites like YouTube are driven by user created content, but more and more they are being filled in with commercial content. They also have advertising, of course. I think sites like YouTube are more just companies realizing they can capitalize on a wealth of user created content and get advertising exposure simply by offering a neat service. Much like Myspace and Xanga capitalized on the angsty user drivel driven content from teenagers. That doesn’t mean I don’t approve, it’s just interesting to see a social sharing phenomenon being twisted slightly into a give and take corporate relationship.

I’m getting more and more confident in GIMP now. Last night I forced myself to do some layout work for Leigh’s dance studio site in GIMP and I’m very satisfied. I have the example of about two hours of work. Yes, I probably could have made it in about one if I had Photoshop, but thats all part of getting better at something. I may soon feel confident enough to never fall back onto Photoshop again. Anyway, here’s the layout so far, below is a snippet and it links to the full size 800×600 layout. Really only the header is “finished”. And even it is going to be a bit lighter in shade.

I’m a long time Photoshop user. I started in high school in journalism class and I’ve been through several versions up to CS2 today. I love Photoshop to death. However, I run Linux now, and dual booting would suck. Qemu doesn’t cut it eaither and I don’t think Wine handles CS2 very well at all.

There is a program called GIMP, GNU Image Manipulation Program, for Linux that is equivalent and I’ve tried many times to come to grips with it’s different interface. I used to despise GIMP, well, I still despise GIMP, but at least now I can work in it.

Here is my first piece of decent work to come out of gimp. A nice, shiny, flare-y, striped glass web 2.0 bar. It was a good learning experience and I thought I’d share it’s beauty.

I was wandering through the contents of an old hard drive and found some neat stuff I made back in freshman year. The first article is a spastic little animated gif of a few pages of notebook paper. Sam Hair. Rad.

The next two are videos. One is a painfully rotoscoped video of my room mate Joe swinging a light saber around. The next is a short claymation of a turtle and a bird. I had a lot of spare time freshman year. Click the links to view them. 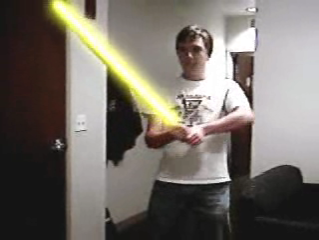 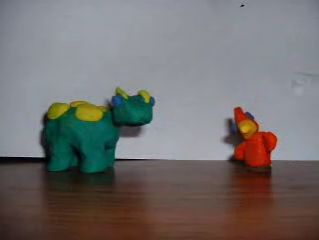