I recieved my DMS4 S.E. Lite mod chip today. I had used Swap Magic 3.5 for a while with a flip-top, but it was noisy and my failure rate was kinda high. Anyway, I figured it couldn’t be too hard to put on a chip and solder a couple leads, right?

So I broke out the tools and got to work. First thing to say, documentation is near non-existant. I scraped together enough info to understand the wiring diagrams, but it’s a bit tough. Second thing to say, some of these leads are absolutely tiny. Here’s a picture of one of the BIOS chip leads with a guitar pick for scale, and a shot of the first four connections. Click for a bigger view. 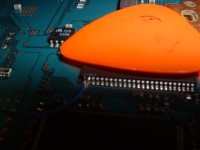 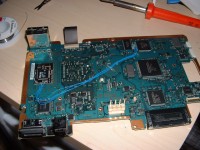 Those IC’s are tiny little buggers. Anyway, I got the majority of the wires hooked up and solid in a few hours time. I have six left. Five are just some easy flat pins that I need to scrape the finish off so my solder will stick. I found that out in a forum after about 10 minutes of not understanding why it wouldn’t solder on. The other one is one end of a really small resistor in a tight corner. I think it’s the toughest point on the board and I messed it all up. I got frustrated and decided to use some extra solder to “encourage” it on. I got sloppy and joind 4 resistors together on accident. I don’t have any desoldering wick, so it’s going to have to wait until tommorow. You can’t tell in the small picture, but the large version is better. 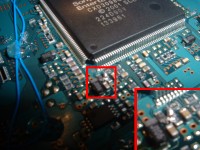 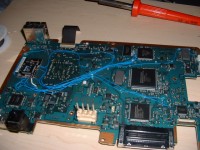 The upside to all this is that I’ve become a much more confident solderer. I think I just made that word up.

As a side note Final Fantasy XII was leaked on Sunday. That’s a whole month before retail, ouch. Pretty impressive for such a high profile game. I happened to be up when it was released and hopped onto a torrent with about 300 of my closest friends. It’s not credited to any group in the NFO or release title, just an independent (I swear I just downloaded the NFO, this kinda release is a little hot for my taste.) I checked Console News today and it doesn’t credit it to any group, so the iND must be for real. Anyway, here’s the NFO for anyone interested who doesn’t want a cease and desist from Square Enix.